In 2015 two young prize-winning musicians, the British cellist Cecilia Bignall and the Russian classical accordionist losif Purits met to form Duo Bayanello, now described as one of the most exciting ensembles in the London chamber music scene. Their mission was not only to combine two instruments as far removed from each other chronologically and stylistically as can be imagined, but to apply them to playing a corpus of traditional music from Spain, Iraq, Israel and eastern Europe.

They have performed to acclaim in an area stretching from the Wigmore Hall to Moscow, Siberia and BBC Radio 3, and they featured on BBC Proms Extra in 2016.

In 2018 they became Trio Bayanello by the addition of the acclaimed young Australian-Russian guitarist Andrey Lebedev, a prize winner of the Guitar Foundation of America Competition, and First Prize winner of the Gisborne International Music Competition and Adelaide International Guitar Competition. Andrey describes himself as on a mission to redefine the relationship of the guitar to the classical mainstream, and one does not find oneself listening to him very long, forging this improbable alliance of the guitar with the accordion and the cello, before feeling one’s finger creeping towards the mission accomplished button. 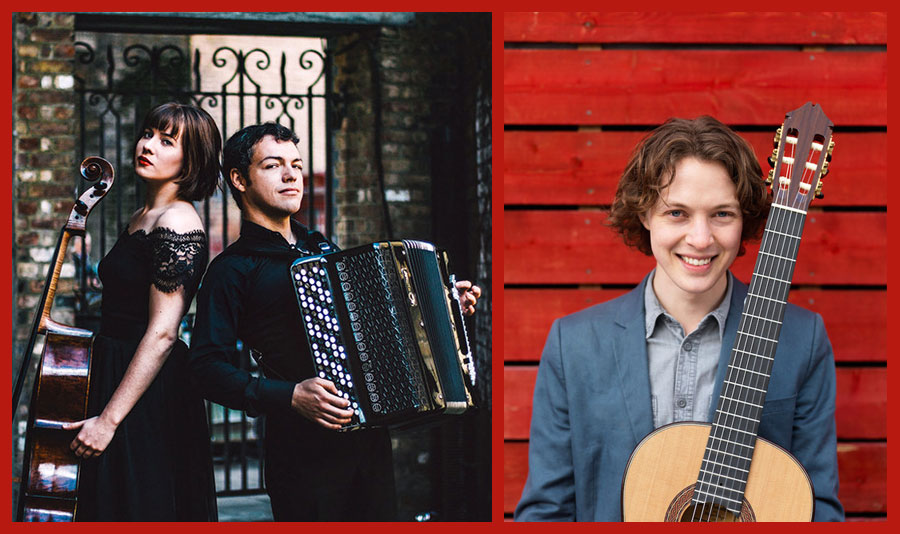 We were treated to the classical guitar with its Spanish overtones, while the accordion in such skilled hands breathed the spirit of the Russian steppes; and the two, allied to the cello with its stolid, romantic English, vale-of-Evesham plangent sonority gave an appreciative audience an interesting taste of a successful experimental union designed to stay with the memory for a considerable time. A top Russian accordionist going hell for leather (sorry, molto con brio), through Gridin’s Gypsy Rhapsody is not for the fainthearted.

Somehow the classical accordion comes across as a quintessentially Russian instrument. But equally impressive, if in more dignified guise, is losif’s accordion rendition of Bach’s Prelude and Fugue in G minor, written of course for the organ but adapting comfortably to the different instrument.

This truly international Russian-Australian-English trio of high young talent gave Stockbridge Music’s first post-pandemic concert before a thrilled and fortunate audience. Like most local concert groups, Stockbridge Music has not had an easy time during its enforced hibernation, but that is nothing alongside the heavy toll borne by the self-employed, under-used artistes themselves.

Recognising the difficulties they have gone through, it was good to see the audience generously contributing to the leaving collection for the three outstanding performers. A magnificent £370 was raised, all of which we have passed on to the artists – the measure of the audience’s appreciation of the music they had just been privileged to hear. We look forward to the return of these magnificent musicians.

Stockbridge Music is a not for profit organisation with a mission to bring world class live classical music to the local community and to foster the musical education of young people.
We use cookies on our website to give you the most relevant experience by remembering your preferences and repeat visits. By clicking “Accept All”, you consent to the use of ALL the cookies. However, you may visit "Cookie Settings" to provide a controlled consent.
Cookie SettingsAccept All
Manage consent

This website uses cookies to improve your experience while you navigate through the website. Out of these, the cookies that are categorized as necessary are stored on your browser as they are essential for the working of basic functionalities of the website. We also use third-party cookies that help us analyze and understand how you use this website. These cookies will be stored in your browser only with your consent. You also have the option to opt-out of these cookies. But opting out of some of these cookies may affect your browsing experience.
Necessary Always Enabled
Necessary cookies are absolutely essential for the website to function properly. These cookies ensure basic functionalities and security features of the website, anonymously.
Functional
Functional cookies help to perform certain functionalities like sharing the content of the website on social media platforms, collect feedbacks, and other third-party features.
Performance
Performance cookies are used to understand and analyze the key performance indexes of the website which helps in delivering a better user experience for the visitors.
Analytics
Analytical cookies are used to understand how visitors interact with the website. These cookies help provide information on metrics the number of visitors, bounce rate, traffic source, etc.
Advertisement
Advertisement cookies are used to provide visitors with relevant ads and marketing campaigns. These cookies track visitors across websites and collect information to provide customized ads.
Others
Other uncategorized cookies are those that are being analyzed and have not been classified into a category as yet.
SAVE & ACCEPT